For many of you it is back to work and back to school time. It is also time for more income property inventory to hit the market. The Toronto real estate market should see a little more life next week as many agents start listing properties for sale this fall. There were fewer houses for sale this summer as is often the case, although prices and demand held steady. The majority of product is still selling for over-asking price and in multiple offers.

As of today The Jays and TFC are both in first place in their respective divisions. Let’s hope that they can both continue their winning ways and are playoff bound in October.

Is Airbnb the next Uber?

There was talk last month of some downtown condo owners being concerned that their neighbours were renting out their condos on a per night basis to renters through Airbnb. The concern was parties and loud noise from potential people next door while no one in the complex knew who they were.

Some cities have laws that restrict your ability to host paying guests for short periods. These laws are often part of a city's zoning or administrative codes. In many cities, you must register, get a permit, or obtain a license before you list your property or accept guests. Certain types of short-term bookings may be prohibited altogether. Toronto has no such restrictions in place.

This phenomenon is the part of the new sharing economy, where like Uber, people can open their doors to anyone with no widespread regulations. We all know the controversy that Uber has caused amongst cabbies in our city. What has been created is a gray area in the economy in between hotels and homes, between cabs and private cars, between businesses and hobbies, between professional spaces and personal ones. Most landlords prefer to have tenants on formal leases but there has always been a market in Toronto for short-term furnished rentals.

Some officials have been talking about a bill to extend the hotel tax to short-term rentals, including vacation homes and rooms rented through increasingly popular online companies like Airbnb. Others say the bill doesn’t go far enough, arguing that, in addition to new taxes, the fledgling industry should be subjected to new regulations. In Ontario we have the Tenant Protection Act which governs the relationship between landlord and tenant. Hotels and Airbnb rentals are not subject to the Act. The Los Angeles suburb of Santa Monica has instituted America’s toughest regulations on short-term rentals like Airbnb. Hosts will have to live on the property during the renter’s stay, register for a business license and collect the city’s 14 percent occupancy tax. There are other cities across North America looking at similar measures so like Uber it may just be a matter of time before things come to a head here in Toronto.

Is the 15% foreign buyers’ tax in Vancouver having an effect?

Last month I spoke about the new 15% tax that foreign buyers will now have to pay in Metro Vancouver on their real estate purchases. Many feel that Vancouver and Toronto have become nothing more than a vessel for laundering money out of China, which has made buying property unaffordable for struggling Canadian families.

Since it has only been a few weeks, there isn’t a lot of sales data yet, but thus far it looks like the new tax is having a big effect on the Vancouver market. According to several online sources, sales of single family homes in the Greater Vancouver Area fell 66% in the first two weeks of August compared with the same period last year. That’s after July was slow as well; sales were down 30% compared with last year. Remember that sales tend to be a little slower during the summer months. The question that remains is whether this will all lead to decreasing prices.

We will be keeping a close eye on this issue as many feel that Toronto is similarly over-heated and could also ultimately use some measures to stem the flow of buyers from out of town. There is an imbalance between supply and demand in the marketplace at the moment, so many are looking at ways to make it a more level playing field for Toronto buyers. 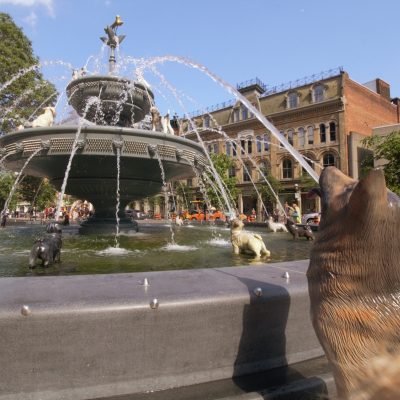 In this issue: Public Open Houses to Resume in Ontario & Landlord and Tenant Bill...

In this issue: Province Puts Moratorium on Commercial Evictions & TRREB Statement on Racism and...

Last month, for the first time in almost 18 years, I did not write my...

In this issue: Investing in Properties outside of the GTA & What is an appropriate...